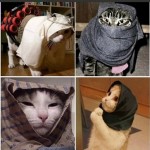 When, on Sunday evening, Belgian police asked citizens not to tweet about the armed operations that were being carried out around the country, anyone could have been excused for reacting with fear.

Belgian forces – searching for suspects in the aftermath of the Paris attacks – told citizens to stay indoors and not go near their windows for safety reasons.

They also appealed for social media silence about any police action users might witness – presumably to keep the suspects in the dark.

A tense time, no doubt. But Belgium reacted – how else? – with cats.

Instead of speculation about the sort of threat police might be reacting to, many people used the #BrusselsLockdown hashtag to post pictures of their pets.

See all the pictures here.