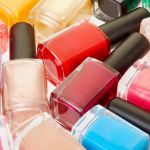 .
Want some toxins with that mani-pedi?

A new study by researchers at Duke University and the Environmental Working Group found that a common nail polish chemical and suspected endocrine disruptor called TPHP is leaching into the bodies of polish-wearers.

TPHP, also known as TPP, is commonly used as a fire retardant in furniture and a hardener in plastic goods. According to the authors, research suggests that the chemical causes changes in hormone regulation, metabolism, and reproductive systems.

The study, published today in Environmental International, found that women who painted their nails with polishes containing TPHP saw a sevenfold increase of a TPHP metabolite (a substance formed when the body metabolizes TPHP) just 10 to 14 hours after painting their nails.

It is very troubling that nail polish being marketed to women and teenage girls contains a suspected endocrine disruptor,” said Johanna Congleton, a co-author of the study, in a press release. “It is even more troubling to learn that their bodies absorb this chemical relatively quickly after they apply a coat of polish.”