After 68 years, a Syrian great-grandmother comes home in Israel 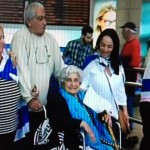 She was 16 when she disappeared from pre-state Israel, and had been assumed dead. This week, Rachel Elkayam was reunited with her relatives, closing a heart-wrenching circle.

Sixty-eight years after she last saw her family, an 85-year-old, silver-haired, Jewish great-grandmother returned home to Haifa in northern Israel this week — having spent her entire adult life living as an Arab woman in the neighboring enemy state of Syria.

Rachel Elkayam, the third of 10 children, was a 16-year-old girl living in the mixed Jewish-Arab city of Haifa in 1947 when her parents moved the family to Tel Aviv. Conflict between pre-state Israel and the Arab world was escalating, ahead of the following year’s declaration of Israeli independence and the full-scale war that then erupted, and the Elkayams believed they would be safer in the center of Israel than the north. But Rachel, a rebellious child, had fallen in love with one of her Arab neighbors, Fuad, and was pregnant with his child. “I loved him, and he loved me,” Rachel Elkayam told Israel’s Channel 2 news in a report on her remarkable life story, broadcast on Friday night.