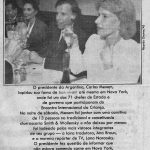 With all the “Weinstization” I have read lately I thought “why haven’t I made public my own experiences”? More and more famous and anonymous women join the cataract of reports of sexual harassment, abuse and rape. What is the requirement for that to happen to a woman? To be attractive? To dress provocatively? No. None of that. The only requirement is to be a woman and leave your home to work, study or both. Many times men with whom I had to work during my modeling years, from directors to producers (always someone with power over oneself) despite being generally much older than me and mostly married, tried to “go out” with me. Sometimes they even gave me a gift thinking that an imported perfume would bend my will. I was always a strong, independent woman and I know how to defend myself. And that is not a metaphor. In my backpacking trips around Europe, it was a sharp razor that prevented possible rapes and saved my life more than once. So I was never forced to do what I did not want to do. But I endured innumerable uncomfortable and humiliating moments. Alleged “jokes” in front of the whole team, like one I remember from an advertising director: “Lana is sure to like women.” To which I replied: “If the only possible option is you, I will surely start looking at women then”. Everyone laughed. But not me. It was his way of putting pressure on me.

There were two very special cases that I believe it’s the right time to make public. Keeping them a secret any longer is helping the abusers. The first one happened with a senior Telemundo executive of Cuban origin with whom I was negotiating my pass from Miami to New York. Confused by his incredible kindness and his multiple job benefits (including paying my gym and even parking in my home, in one of the most expensive cities in the world) I gladly accepted all offers, until the end of the last meeting was sealed with a inappropriate and unexpected hug from him. He left hanging the hand that I offered. A hug that I managed to get rid of after my initial stupor. There I noticed how inappropriate the meeting place was: the restaurant of a hotel. I would not be surprised if he already had a room reserved and that he surely assumed it would be a “natural reaction” on my part. C.B. wasted no time at all. A few hours later the NY news director telephoned me and said some words I will never forget: “The job offer is off and I advise you to learn how to negotiate for next time.” Yes. A woman immediately believed the stalker and did not give me, the harassed woman, the slightest chance to explain anything. She closed the door in my face.

As I explained before, I am a strong woman and I arrived (crying and like a wet rat as the lawyer would describe me years later) to see a lawyer, who advised me wisely that “since everything was lost”, I should go over this guy to the top honchos to tell them what happened. I had nothing to lose and what I had was evidence in the form of personal cards that the executive had sent me. They believed me and – hopefully – I got my job back. But the executive suffered no consequences, they didn’t touch him. It was even an open secret that he had a lover in the local Telemundo station to whom he had given a car with funds from the company. He was untouchable.

Another episode of the many I could tell happened with former Argentine President Carlos Saul Menem. In 1989 working as Telemundo’s newscaster, I interviewed the president. Later I received a call from an entrepreneur friend, M.F. who told me that Menem invited me to dinner in Manhattan that night with the entire delegation.

Menem was staying at the official residence of ambassador Jorge Vázquez, who has since died, on the elegant fifth avenue. I arrived dressed very modestly in a suit and a silk blouse showing no cleavage, and suspecting nothing. Several limousines awaited us downstairs and we were taken to a famous steakhouse. Vegetarian as I am barely ate a salad and drank water as is my custom. At the end of the meal, they invited me, along with the rest of the people – or so I thought – to have a drink at the ambassador’s residence. We left and someone, I do not remember who, indicated who was traveling in what limo. Suddenly the car moved and I found myself alone with Menem. This man is charismatic and very nice but I want to be clear: I would not touch him with a fishing rod. I asked him where the others were and he told me that everyone would go to the residence. My whole body tensed and I was in a state of maximum alertness. We arrived, got off the limo, and when 10 minutes passed and no one came, I said I had to work early, rejecting the president’s offer to “drink something”, I got into the private elevator and waited alone for a taxi on the cold, dark New York night. I felt used, stupid and it became clear to me what was the role of the “facilitator” entrepreneur who had invited me when the next day he called me and asked me “how it was”, assuming that I had slept with the politician. I kindly told him that nothing had happened and cut off the communication. I still feel a bitter test in my mouth when I think of that episode. What would have happened if I was younger, or more timid or less sure of myself? How many women or girls have not been able to take that taxi?

As with the stories of abuse, harassment, and rape of Hollywood tycoon Harvey Weinstein, there are “facilitators” (and female facilitators!) Who help this culture of aggression, the use of women as sexual objects, even violence against those that dare to resist and even drugs like the case of the multiple rapist Bill Cosby, no matter how much justice acquits him. It’s time for all women to say enough. Enough!

The photos were published in international media. This one came out in “Gente” from Brazil.